Founded in 2011, ComparaMejor.com quickly became the top online insurance comparison tool in Colombia. They became the first to integrate instant online quotes from the top insurance providers in the country, and also pioneered online sales for several insurance verticals. We won’t discuss details about ComparaMejor.com’s marketing strategy or budget, however we will learn how they recently managed to skyrocket their search campaign’s performance in less than 2 months using Adboozter.

Since 2011, paid search results in the insurance vertical have only gotten more crowded around the world. Multinational insurance companies are starting to sell directly through their online channels while multiple comparison platforms compete for a piece of the pie. Increased competition naturally drove CPCs up throughout the years, pushing CPAs to the ceiling pretty quickly. On October we got a call from ComparaMejor.com’s marketing team. They needed some help managing Adwords, in short, their objective was to lower cost per leads while increasing conversion volume, so we turned Adboozter on and got to work.

Here’s what Adboozter’s dashboard looked like for one of ComparaMejor.com’s campaigns.

Adboozter’s analysis quickly identified that many keywords were underperforming, so in this first week we focused on the tool’s high cost keyword report. This allowed us to quickly identify and take action upon keywords performing poorly. See that “Search terms” button on the image? It allowed us to identify more that 50 costly negative terms that otherwise would been hidden in an ocean of search terms at the Adwords interface. Additionally, Adboozter’s setup checklist alerted us about some structural changes the campaign was needing. 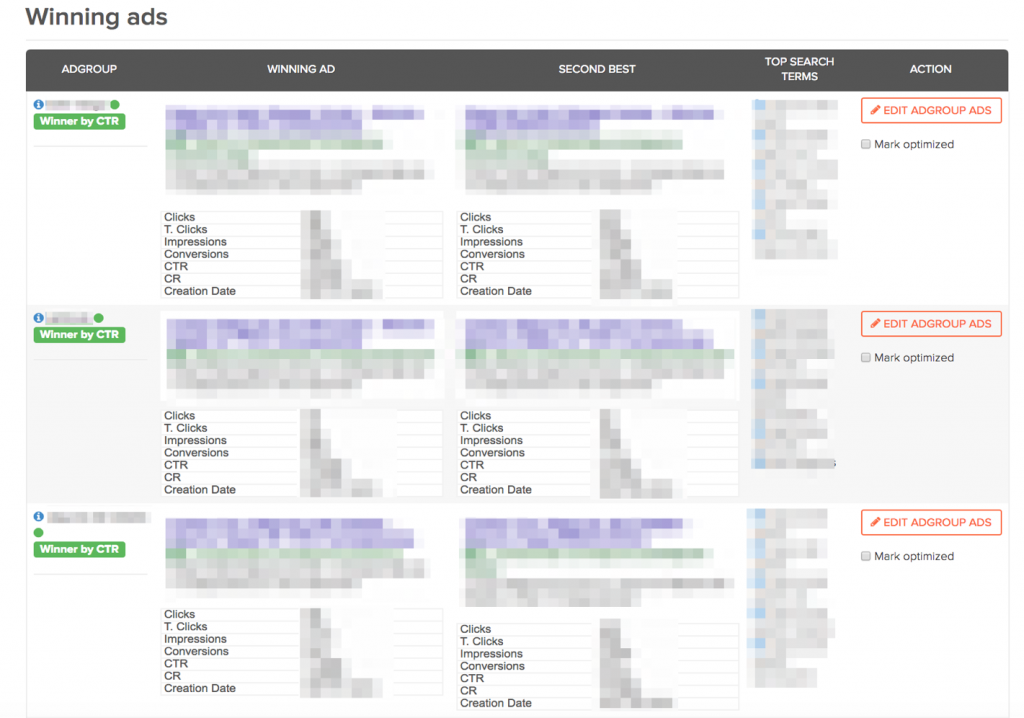 Adboozter’s Ad Optimization Report showed us that ad copy needed some work, so we decided to re-write every ad, obviously creating at least two ads per ad group to enable continuous ad testing (which was going to be key in the coming weeks, as Adboozter began to show results from ad split tests). We also decided to pause a few additional keywords while adding some new keywords suggested by Adboozter.

Negative keyword optimization, a very powerful, and probably my favorite Adboozter feature. During November and December, 336 negatives were identified and added using Adboozter.

Additionally, the ad optimization report showed us some VERY interesting split testing results. We decided to pause/remove some keywords, and edit another 30 (tweaked bids or match types).

How about that? Immediately after Adboozter’s first optimization session cost per conversions started to significantly decrease week after week, while conversion rates skyrocketed. This was a natural reaction to blocking undesired click volume driven by unrelated search terms.

Here’s a quick summary of what I call…the Adboozter effect:

I wish we could discuss how much money ComparaMejor.com will save and how much more money their campaigns will generate thanks to Adboozter, but for obvious reasons I can’t disclose that info, however, what we CAN do is invite you to try Adboozter for free by clicking here. 😉